This is Where It Ends

This Is Where It Ends by Marieke Nijkamp
My rating: 1 of 5 stars

I wasn't sure if I should give it one star or be generous & give two... but I just really didnt like much about this book at all.
First, I knew the topic of a school shooting was going to be intense. I just didnt realize how intense this was going to be. Like a little too much for me. A little too much in the sense that it was too fast & too scattered in the story telling.
We're seeing this story of a teenager come to an auditorium & lock the students in & go on a shooting rampage. Why? Because he obviously is troubled. He's lost his mother - his father is abusive - & apparently he can't handle his sister's sexuality. It all just angered me because it felt like none of it made any sense. I guess in reality, most shootings dont make sense - so I'll give it that.
& in each chapter, we are visiting with each of the 4 people centrally involved - Ty's sister, her girlfriend, the girlfriend's brother & Ty's ex girlfriend.
To say there were a lot of characters to keep up with is an understatement. For every 4 of the stories, there are a few more people connected to each one. It can get sketchy on whose who.
& in the end? I was just angry at who didn't make it out of the school at the end of the day & the results for Ty.
I didn't find any enjoyment in this book at all. Left angry & frustrated. Again, could make it a better than 1 star rating? But let's just chalk this rating up to my anger speaking.

10:00 a.m. The principal of Opportunity High School finishes her speech, welcoming the entire student body to a new semester and encouraging them to excel and achieve.

10:02 a.m. The students get up to leave the auditorium for their next class.

Told from four different perspectives over the span of fifty-four harrowing minutes, terror reigns as one student’s calculated revenge turns into the ultimate game of survival.
Posted by Rebecca Jo at 11:26 AM No comments:

Everything is Beautiful - Adult Coloring Book 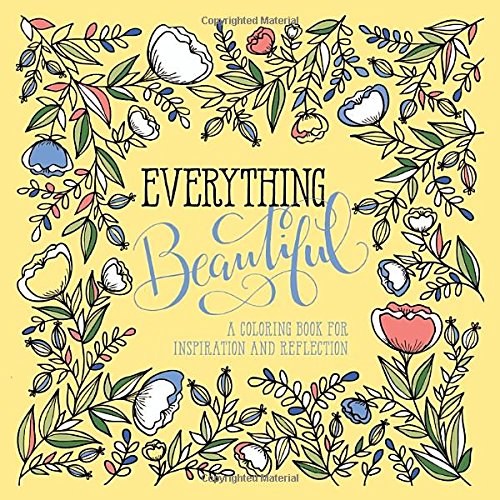 I have the Whatever is Lovely coloring book as well
.. made by the same people...
These are the BEST .. seriously, the BEST.
The paper is so thick & nice. I use colored markers & they dont bleed through to the page below it.
& the paper makes it smooth to color on as well.
The designs are all so beautiful - hence the name I guess ;)
But I really could take some of these & pull out & frame & make a collage on my wall.
They are that worthy of the artistic look these pages have.
I gave a bunch of the Whatever is Lovely coloring books for Christmas last year.
This may be my go-to gift for this year.
Posted by Rebecca Jo at 5:16 AM No comments:

Everything, Everything by Nicola Yoon
My rating: 5 of 5 stars

I devoured this one.
Such a fast read. Had me totally gasping in parts, sighing in others & cheering on Madeline as she decides she is willing to give up EVERYTHING to live life.
Madeline is a 'bubble girl' - someone with a compromised immune system that has to stay confined in her home. & then one day, she sees her new neighbors move in, espcially Olly, the boy who can't stand still & is jumping off of things & full of energy & life.
With the help of her nurse, Carla, Madeline gets to meet Olly & their relationship takes off from there.
I loved how fast this book went from chapter to chapter... & it has little drawings & clips from emails & computer screens & texts from phones scattered throughout. Gave the book such personality.
I honestly couldn't put this down till I got to the end. I even lost track of time at work during lunch reading & got back 15 minutes late... I got that lost in it.
I'm glad I finally got a book I really enjoyed after the last few that left me just depressed & frustrated.

My disease is as rare as it is famous. Basically, I’m allergic to the world. I don’t leave my house, have not left my house in seventeen years. The only people I ever see are my mom and my nurse, Carla.But then one day, a moving truck arrives next door. I look out my window, and I see him. He’s tall, lean and wearing all black—black T-shirt, black jeans, black sneakers, and a black knit cap that covers his hair completely. He catches me looking and stares at me. I stare right back. His name is Olly.Maybe we can’t predict the future, but we can predict some things. For example, I am certainly going to fall in love with Olly. It’s almost certainly going to be a disaster.
Posted by Rebecca Jo at 4:53 AM No comments:

Luckiest Girl Alive by Jessica Knoll
My rating: 1 of 5 stars

This was a DNF.
I just couldnt... nope. Not a book for me.
I got just about 30% in the book & I was so grossed out by the book & knew I never wanted to know a thing about Ani... not the type of person I care to learn anything about.
All the name dropping, label branding, talk of being skinny & anorexic & just how Ani's mind works? Totally not something I care to even learn more about....
I just had to stop. Couldnt force myself any longer.
Not my cup of tea...
moving onward

HER PERFECT LIFE IS A PERFECT LIE.As a teenager at the prestigious Bradley School, Ani FaNelli endured a shocking, public humiliation that left her desperate to reinvent herself. Now, with a glamorous job, expensive wardrobe, and handsome blue blood fiancé, she’s this close to living the perfect life she’s worked so hard to achieve.But Ani has a secret.There’s something else buried in her past that still haunts her, something private and painful that threatens to bubble to the surface and destroy everything.With a singular voice and twists you won’t see coming, Luckiest Girl Alive explores the unbearable pressure that so many women feel to “have it all” and introduces a heroine whose sharp edges and cutthroat ambition have been protecting a scandalous truth, and a heart that's bigger than it first appears.The question remains: will breaking her silence destroy all that she has worked for—or, will it at long last, set Ani free?
Posted by Rebecca Jo at 4:28 AM No comments:

Suddenly Royal by Nichole Chase
My rating: 3 of 5 stars

After coming off some debbie-downer books, I needed some light fluff. This was exactly that.
An ordinary girl finds out she's a Dutchess & gets to hang out with the most eligible Prince - fluff in the making.
Romance, fairy tales, happily ever afters. I'm all about it.
I really enjoyed the book because it was mindless & just cheesy & a fast read.
I didn't even really feel any 'drama' or pull to any sort of direction of the story. That's the only reason I only gave it 3 stars. Like there was no drop on the roller coaster to get back to the top again - make any sense? Just a basic story that is predictable. But that was OK with me.


View all my reviews

Samantha Rousseau is used to getting her hands dirty. Working toward a master’s degree in wildlife biology while helping take care of her sick father, she has no time for celebrity gossip, designer clothes, or lazy vacations. So when a duchess from the small country of Lilaria invites her to dinner, Samantha assumes it’s to discuss a donation for the program. The truth will change the course of her life in ways she never dreamed.Alex D’Lynsal is trying to keep his name clean. As crown prince of Lilaria, he’s had his share of scandalous headlines, but the latest pictures have sent him packing to America and forced him to swear off women—especially women in the public eye. That is, until he meets Samantha Rousseau. She’s stubborn, feisty, and incredibly sexy. Not to mention heiress to an estate in his country, which makes her everyone’s front-page news.While Sam tries to navigate the new world of politics and wealth, she will also have to dodge her growing feelings for Alex. Giving in to them means more than just falling in love; it would mean accepting the weight of an entire country on her shoulders.
Posted by Rebecca Jo at 5:40 AM No comments:

The Kitchen House
by Kathleen Grissom

The Host
by Stephenie Meyer

Have a Shelfari Book Shelf? Let me know... I'll link it up!